The operating authority of buses, vans, and electric trams were given to the Municipality in Ankara with the decree of the Council of Ministers on January 22, 1930. Ankara Municipality Bus Administration was established in 1935, with the importation of 100 buses from the Soviet Union, launched the Public Transportation Services. 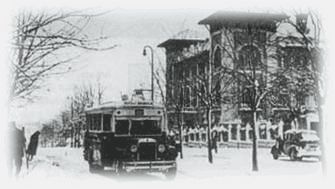 HISTORY
For a half a century the capital of Ankara has faced the case of very rapid and intense urbanization which resulted in bringing together with it the problem of transportation. Here as we examine the bus, bus transportation and urban transportation we need to take into consideration developments in environmental factors specific to the city of Ankara. There has always been an intercommunicative relationship between the development of urban passenger transportation services and the urban forum. 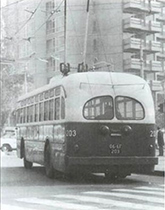 Ankara, in 1930 was a city with a population of 90 thousand people, but of the total journeys made only 15 percent of the trips were taken with vehicles. Now the city has grown to approximately 4.9 million inhabitants and 90 percent of the journeys are vehicle trips. There is an 82 year time span of EGO, so let’s take a look from this point at the 82-year panorama.

In  the 1920’s, Ankara had a population of 25 thousand that had densely settled around the castle, had a distinction of being a city of pedestrians both in terms of topographical features and as well as its size. Only a very limited number of vehicle travels from around the city and the train station towards the yards were demanded for and was met with cars.

In the early 1930’s, with the rapid increase of Ankara’s population, increases were also observed in demand for vehicle travel as the city began to spread to the Cebeci and Yenisehir sections. Although the operating authority of buses, minibuses and electric trams were given to the Municipality by the Council of Ministers on 22/11/1930, there was no initiative taken in this regard until the year 1935. Because, in order for the local passenger transportation system to be supported by the public the country’s economic and administrative conditions needed to be in good condition. But it was well known that in those years the economic crisis in the world had negatively impacted the economic situations of our country as well. However, despite all odds, the municipality was able to make the first attempt in 1935. Ankara Municipality Bus Administration was established and imported 100 ZIS brand buses from the Soviet Union. Taking advantage of this opportunity, it provided services with 15 lines of 6 km in average length. This system remained in place without any change in its function until 1940. However with the start of the second world war only 7 buses were received in 1942. This led to a rapid decline in the number of the bus service. In 1944 by making an annexed budget administration the bus service received the name "Ankara Bus Operation", but it was unable to draw business development.

In 1946, 19 more buses were purchased, however, as a result of fire, 18 buses were out of service. In this tight situation, the General Automobile and Drivers Association made the Municipality accept its requests to creation a regular taxi and minibus line. In 1947, even though 10 additional buses were bought, the share of public transport declined to 50 percent. As of the date of 01.01.1950 the Municipal Bus Operation received the name "Ankara Electricity, Gas and Bus Operation" and had gained management flexibility. In the 1950’s, the number of lines of EGO had reached 28, the total service area was 171 km. and the number of passengers carried increased 2.7 times. The time between 1960 to 1968 was a period where the number of EGO vehicle parks and the lines remained substantially constant. As the number of passengers carried decreased, the share falling to public transportation fell to 30 percent. EGO vehicle parks expanded in 1969 by purchasing 140 buses. Even though in the first half of the 1970’s there was an increase in the number of new buses purchased, the vehicles were not given to service.

In 1984 the Hungarian brand Ikarus articulated buses were purchased and put into service. In 1983 EGO had 25 express lines and 119 normal lines. Thus provided a great relief to the urban passenger transportation.

In 1989, the foundations of the metro lines were laid. In 1992, to prevent air pollution from exhaust fumes 30 buses were changed over to   natural gas and had started providing service. In 1995, EGO brought a new dimension to urban public transporting by putting to service the double-decker buses. The light rail public transport system known as Ankaray came into service in 1996 with 8.7 kms in length, the line ran between Dikimevi and ASTI and was proving service to approximately four hundred thousand citizens. In 1997, the heavy rail system called the Ankara Metro with 14.5 km in length began to give service between Kizilay and Batikent. Metro was built with the capacity to transport and provide public service to about seven hundred-sixteen thousand citizens per day.

In 1998, the automatic fare collection system was put in service on public transportation vehicles. In 1999, 264 units of MERCEDES brand buses were purchased, 70 of them were articulated and 194 normal (solo) buses. For the first time digital banners were installed and were being used on these buses.

In 2001, Ankaray, Metro and City Bus fare collection systems were all integrated. On all public transportations a single type of fare collection ticket was used, and free transfer for trips were started during this period. In 2005, 50 diesel, 400 natural gas buses were purchased. In 2006, vehicle tracking and automation system was activated, so that the fuel supplied to all of the buses by our institution can be followed.